Are you a massive movie buff? Then you probably know where some of your favorite movies have been filmed. Each film has their own iconic locations and every city around the world can be remembered for the movies that were made there.

Across America some of the IMDB’s top 250 movie were filmed in these famous metropolitan areas.

Los Angeles, CA – 595 of the top IMDB movies have been filmed in or near the city of Angels. The list includes: The Godfather, The Godfather: Part II, The Dark Knight, Pulp Fiction, and Fight Club.

New York, NY – Roughly 307 of the top IMDB films have had scenes filmed near the Big Apple. Some fan favorites are: Goodfellas, Leon: The Professional, Citizen Kane, Taxi Driver, and Batman Begins.

Boston, MA – Nearly 66 of the top IMDB films were shot in or near Bean Town. Notable films are: The Departed, Jaws, Good Will Hunting, Mystic River, Shutter Island, and Moonrise Kingdom.

Chicago, IL – 37 of the top 250 were shot around the Windy City. We all remember The Dark Knight, North by Northwest, Batman Begins, and Groundhog Day.

Las Vegas, NV – Close to 34 films were made near Sin City. The list includes favorites like The Godfather, Into the Wild, Casino, and Million Dollar Baby.

Take a look for yourself and see where your favorite films were made. This interactive map showcases IMDB’s top 250 movies and it was curated by the fine folks at Travelex Currency Exchange.

The map lets users rotate around the entire globe, all while being able to zoom in and out. Plus users can filter the map by each of the 250 top movies. Give it a try and let us know what you think in the comments below. 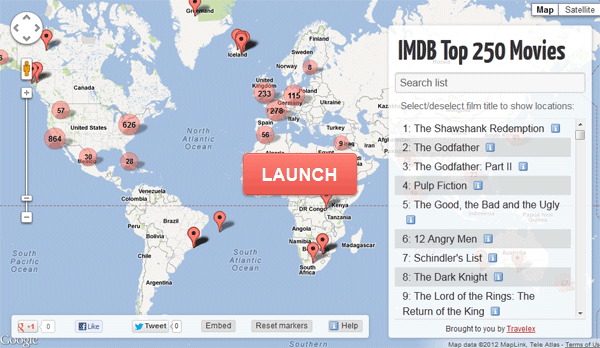 Outreach Coordinator. Snowboarder. Caffeine Enthusiast. Cyclist. I like puppies. I love using insulin - so I can eat Cheetos. Follow my Tweets! @jimmydaugherty